If you want to know the best Warren Buffett book recommendations, this article will come very handy.

It reveals the very best such books that can make you rich when it comes to investing.

Because he’s the very best there is and has ever been, when it comes to investing and making money!

But seriously – Warren Buffet is a man of many pages – when asked for his number 1 tip for success, he famously told his students to read 500 pages a day.

Buffet is known for reading up to 1,000 pages per day, so 500 pages should be easy, right? Even today, Buffet spends at least six hours out of his day reading a book.

If you’re stuck on what book you should pick up, I did a little research for you to see which books Warren Buffet has recommended the most.

Go ahead, sort through this list and see which book interests you the most. This list is going to cover everything from basic to advanced investment strategies, and there’s even a nuclear war book on here.

Also See: How to Be Self Employed and even Very Independently Wealthy.

He then switched to owning banks. Eventually, he shut his hedge fund down and put all of his money towards running an insurance company.

For those of you who aren’t familiar, an insurance company is a hedge fund that can keep investor’s money and retain 100% of the profits that come in.

So, what are some of the books this popular man has recommended? Let’s get started on this long list of books Warren Buffet recommends:

Quote from Warren Buffet “Of all the investments I ever made, buying Ben’s book was the best.” – Warren Buffet

For those of you who are just getting started, you may want to go ahead and pick up “The Intelligent Investor,” which was written by Benjamin Graham.

Warren Buffet has described this book as “the best book about investing ever written” and we’re going to take his words on it.

Reading through the book, I see that Graham has outlined the basics of his “value investing approach.” These are actually the basics that Warren Buffet and other successful investors are known for using.

Warren Buffet read this particular book when he was only 19 years old. This is probably the book that convinced Buffet to join Benjamin Graham at Columbia University where he set out for a journey on the most successful investing career we have ever witnessed in this world.

I took time to read this book before writing this and I must say, it’s a true classic that was written during a period when index funds weren’t even a thing.

It’s easily one of the best books to read on making money out there today!

It was written for those investors who would like to build their portfolio of individually selected stocks.

Even those casual investors that are aiming for something more than index funds will pick up a thing or two by reading this book.

It details the difference between investment and speculation, the basic roles bonds should play in a portfolio that is well-balanced, and the basic impact inflation has on a portfolio.

Security Analysis is an advanced textbook that is from Warren Buffet’s teacher, and it is the second recommended book by Benjamin Graham on this list.

The Intelligent Investor is the book we just told you about and it is best for beginners, while “Security Analysis” is the advanced sequel.

This book was published back in 1934 and in the book, Benjamin Graham goes into detail how he went about choosing stocks to invest in.

I’m going to warn you, this book goes into depth and will feel as if you’re reading a textbook.

If you plan on investing any money, this book right here is definitely a must read.

Also See: How to Stop Being Poor or Broke and How to Make Success the Best Revenge.

3. Where are the Customers’ Yachts?

In 2006, after Warren Buffett finished reading “Where are the Customers’ Yachts?” by Fred Schwed, he called it “the funniest book ever written about investing.”

This book has been written from the perspective of an individual visiting New York.

Impressed with all the yachts he came across that were owned by stockbrokers and bankers, he asks where all the customers’ yachts have gone.

The surprise?  The customers weren’t able to afford them.

This is a hilarious book that was written with humor in mind to expose Wall Street for the sham that it is.

With this book, you might just learn a thing or two about how Wall Street has been designed to make brokers and bankers richer, it isn’t designed to help the average investor.

4. The Little Book of Common-Sense Investing: The Only Way to Guarantee Your Fair Share of Stock Market Returns

This is another good book recommended by Warren Buffet and it would be best for beginners.

The book was written by Jack Bogle, who is the founder of Vanguard, and it puts why most investors fail, why low-cost index funds are the easiest and best way for building wealth in the long run and why most mutual funds are rigged, all in basic terms.

“Common Stocks and Uncommon Profits” is a book that was first published back in 1958.”

In fact, Warren Buffett read this book when it first came out and it is what helped shape Buffet’s investment style.

Warren Buffet has described this book as a “very, very good book.” I have to agree with him, and I encourage my readers to go ahead and give this one a read.

6. The Most Important Thing: Uncommon Sense for the Thoughtful Investor

Howard Marks is a popular investor. He builds on the teaching of Benjamin Graham and went on his way to earn well over 20% returns per years for a good 25 years.

Story has it that Howard Marks published this book due to Warren Buffett urging him to.

Buffet has been impressed with Marks’ investment performance to the point that he promised he would write a blurb for him if he published the book.

Finally, back in 2011, Marks took Buffett up on that offer and published “The Most Important Thing.”

Did Warren Buffett live up on his promise? Of course, he did, and here’s the blurb Warren published:

“When I see memos from Howard Marks in my mail, they’re the first thing I open and read. I always learn something, and that goes double for his book.”

“Poor Charlie’s Almanac: The Wit and Wisdom” was written by Charlie Munger, who was Buffett’s right- hand man.

The book is basically a collection of a variety of speeches, essays, and other public works that Charles put together during his career.

If you take time to read this book, you will discover just how unique Charlie’s mind really is, and why Warren Buffett recommends the book. 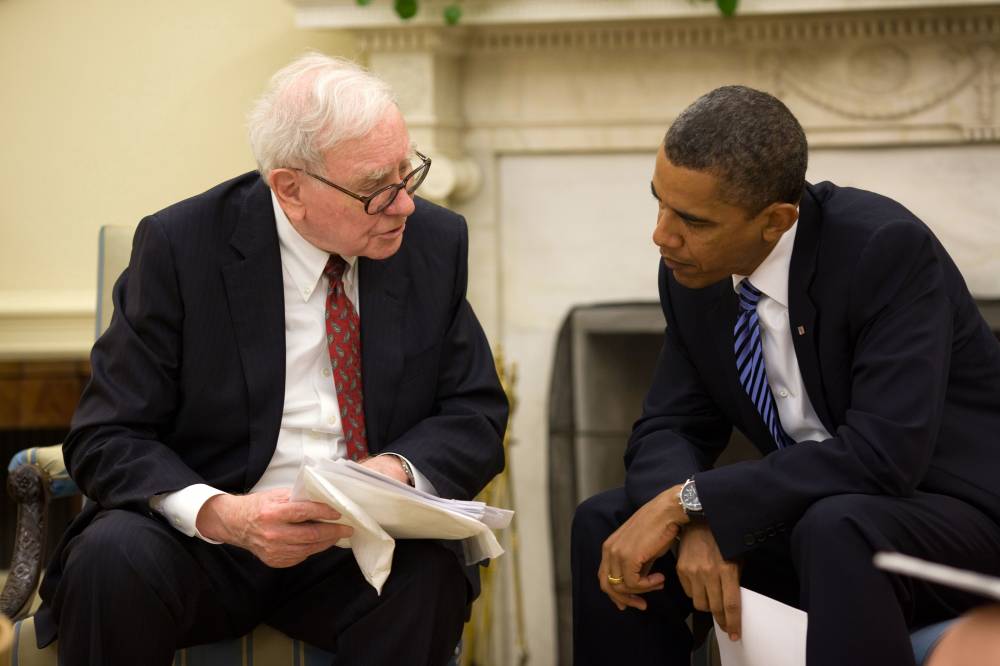 8. A Few Lessons for Investors and Managers from Warren Buffett

Warren Buffett has recommended “A Few Lessons for Investors and Managers from Warren Buffett,” a book written by Peter Bevelen.

Warren Buffett recommends this particular book in 2011 during an annual letter to shareholders.

The book is interesting, it’s a collection of essays and quotes that Pete Bebelin pieced together during various public writings and appearances of Buffett’s.

This particular book is only 81 pages, so it’s a quick read. The book explains Berkshire’s investment and operating principles.

It sums up what Charlies and Warren Buffett have said at annual meetings over the years.

Phil Bueth is the author of this book, and he is a broadcaster.

He was born with a condition called Cerebral Palsy and eventually, after a lot of work, he climbed his way to an executive position at one of the largest media companies in the country.

“Limping on Water” is a must read.

Also See: How to Be a Rich and Successful Businessman.

“Stress Test: Reflections on Financial Crisis” is a book that was written by Timothy Geithner. Actually, it’s a bestselling book by Mr. Geithner.

The U.S. Secretary of the Treasury wrote this book during the Great Financial Crisis that took place in 2008.

Geithner did a great job with writing this book as he takes readers behind the scenes to give them a look at what it is like to be the individual in charge as the economy is collapsing (it’s not that pretty).

Warren Buffet enjoyed this book as he described it as “Sensational.”

This article contained a complete list of the top 10 recommended books by Warren Buffett.

The next time you’re in the mood to read, go ahead and pick one of these books up and get started.