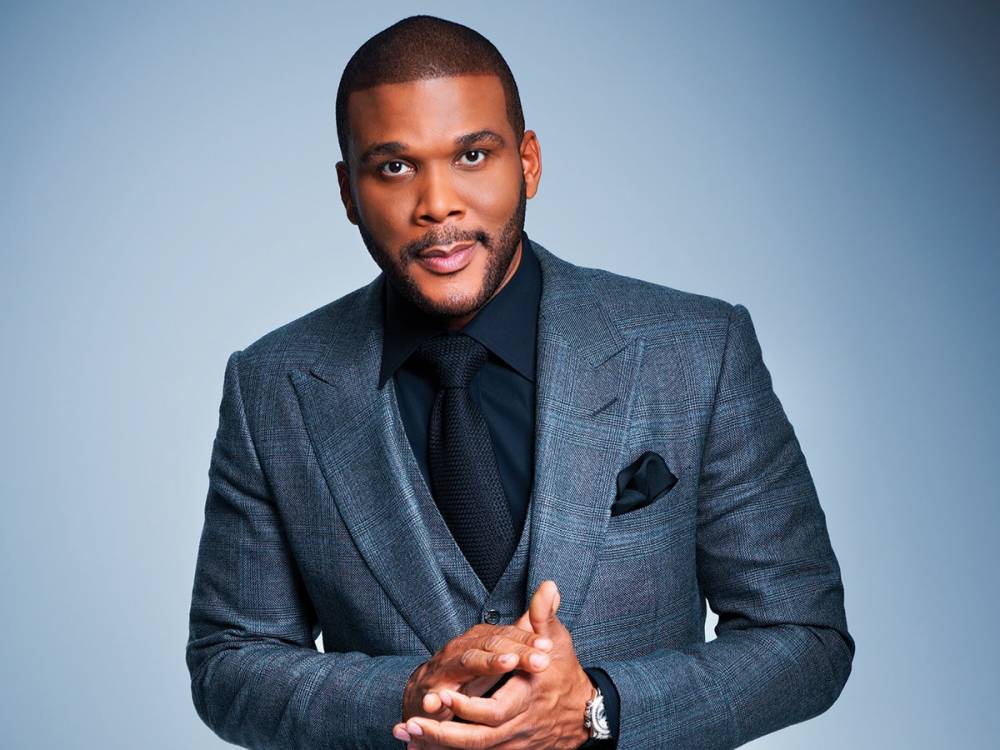 Tyler Perry’s net worth is estimated to be around $600 million, as of 2020. This is a huge figure that also reveals the wealth of talent deposited in him.

Born Emmitt Perry Jr. on the 13th of September, 1969, Tyler Perry is an actor, writer, producer, and director. He has achieved major successes in both film and television.

He is one of the few people in the entertainment industry with uniquely versatile skills. This is also reflected in the types of movies and TV shows he creates.

It’s really no surprise that his net worth is so massive as he is one of the richest actors and directors in Hollywood.

In 2011, Forbes listed him as the highest-paid man in entertainment. His earnings between 2010 and 2011 were put at $130 million. He has added several more millions to his net worth since then with the many more movies and projects he has created.

Tyler Perry’s fortune is from several sources. His main source of earning is the entertainment industry, thanks to many movies, TV shows and many different other activities he’s involved with.

He earns a lot of money as a screenwriter, an actor, a producer and a director. He has been involved with some of the best hit stage plays, films, and television shows over the years… and is still going strong.

In 2012, he made a very lucrative deal worth millions of dollars to air his series “The Haves and the Have Nots” on the Oprah Winfrey Network or OWN.

The deal turned up to be OWN’s biggest success in shows and ratings.

Tyler Perry was born Emmit Perry Jr. He was born on the 13th of September, 1969. His birthplace is in New Orleans, Louisiana. He is the son of Emmit Perry Sr. and Willie Maxine Perry.

His father Emmit was a carpenter. He was a strict disciplinarian who beat his children easily.

Perry has three siblings and all of them feared their father’s beating.

At one time in his life, Perry contemplated suicide to escape his father’s beatings but thankfully found solace and succor from the teachings of the church that his mother took him to every week.

Perry had a troubled childhood while growing up. He was molested by a friend’s mother when he was 10, and before this incident, he had been a victim of molestation in the hands of three men.

He later got to know that even his father had molested a friend of his in the past as well. It’s interesting to know that Perry got to know through a DNA test that Emmit Sr. was not actually his biological father.

At the age of 16, Perry had to change his name from Emmit to Tyler to distance himself from his father Emmit Sr.

Perry did not graduate from high school but he made sure he obtained his GED.

He was inspired to pursue a career in writing after watching an episode of The Oprah Winfrey Show where a guest described the therapeutic effect of writing, and how a writer can use his or her writing to work out their own problems.

Perry started writing a series of letters to himself in his early 20’s. This became the basis for his first musical play “I know I’ve Been Changed”.

Whether you have writing skills like Perry or not, you can still make money you need using some of the techniques in the following articles:

All the above articles are completely free to read right on this Kingged.com website.

1992: Perry first performed his musical play “I know I’ve Been Changed” at a community theater in Atlanta. He had used his life savings of $12,000 to finance the play but it received less than stellar reception.

Regardless, Perry persisted and rewrote the play so as to improve its acceptance. He went on to do this in the next six years.

1998 – 2004: “I know I’ve Been Changed” was staged at the House of Blues – a chain of live music concert halls and restaurants, and then at the Fox Theatre, all in Atlanta.

Following the success of this play, Perry went on to produce other plays over the years.

He toured with his plays on different locations across the US, and most especially theaters and night clubs considered as “urban theater circuit”(formerly called Chitlin Circuit).

2005: A Forbes’s article by Brett Pullery and published in 2005 revealed that Perry made a lot of money while creating and touring with his new stage productions.

Ticket sales were more than $100 million. He earned over $30 million from the videos of his shows and made approximately $20 million in merchandise sales.

Perry budgeted the sum of $5.5 million to produce his first film titled “Diary of a Mad Black Woman”. It was a romantic comedy-drama film.

This film was a hit against all odds by critics. It grossed over $50.6 million in the United States and Canada.

It also a 16% approval rating from the movie critic site Rotten Tomatoes based on 114 reviews.

At the box office, this movie brought in $22 million besting movies like “Hitch” and “Constantine”.

2006: Perry took at first shot as a director in the sequel to the 2005 “Diary of a Mad Black Woman” titled “Madea’s Family Reunion”.

In this romantic-comedy, he also reprised his role as Mabel “Madea” Simons, Uncle Joe Simmons, and Brian Simmons. This film received mixed reviews from critics.

It opened at number one on the box office with $30 million in the first weekend.

Eventually, it grossed over $63 million in North America and got a 25% approval rating from Rotten Tomatoes.

He produced the television series “Tyler Perry’s House of Payne” which would run for 8 seasons ending in 2012.

This year, Perry published a humor novel titled “Don’t Make a Black Woman Take Off Her Earrings”. It is a collection of advice, stories, and wisdom written in the viewpoint of Madea.

This book became a bestseller and won the 2006 Quills Awards for Book of the Year.

It grossed over $30 million worldwide.

Another film produced and directed by Perry this year was the comedy-drama film “Why Did I Get Married?”. He also starred in this film as Dr. Terry Brock, a pediatrician.

This film grossed over $55 million domestically. It received a 45% approval rating from the review aggregator site Rotten Tomatoes.

2008: He produced and directed the romantic comedy-drama film titled “Meet the Browns”. This film was an adaptation of a stage play of the same name.

Perry also released his next film titled “The Family that Preys”. This drama film opened at number 2 in the box office. It eventually grossed over $37 million domestically.

2009: He continued his “Madea” series in the comedy film “Madea Goes to Jail”. Perry reprised his role as in the preceding series. He was also the producer and director of this film.

He went on to write, direct and star in the romantic musical comedy-drama film “I Can Do Bad All by Myself”. This film opened at number one in the Box Office.

He also collaborated with Oprah Winfrey to present the film “Precious” which is an adaptation of the novel “Push” by Sapphire.

This film grossed over $30 million in its opening weekend and made over $60 million domestically.

He directed the film adaptation of the choreopoem titled “For Colored Girls Who Have Considered Suicide / When the Rainbow Is Enuf” written by Ntozake Shange.

2011: He wrote, directed and starred in the film adaptation of “Madea’s Big Happy Family”. This film is a continuation of the “Madea” series.

The film ranked number 2 at its opening weekend and grossed over $25 million. Overall, it earned more than $53 million.

The television series created by Perry titled “For Better or Worse” premiered on TBS.

2012: Perry produced and directed the romantic drama film “Good Deeds”. He played a leading role and starred as Wesley Deeds, head of the family-owned Deeds Corporation.

The film received mixed reviews. It opened at number two in the Box Office and grossed over $15 million in its opening weekend. It’s total earning peaked above $35 million eventually.

He also starred in “Madea’s Witness Protection”. This film received poor reviews but it was a financial success. In total, it earned over $66 million in the box office.

Perry was cast in the Rob Cohen directed crime thriller film “Alex Cross”. He played the role of Alex Cross, a psychologist, and a police lieutenant.

2013: He produced and directed the romance-drama film known as “Temptation: Confessions of a Marriage Counselor”.

This film grossed over $53 million in the Box Office.

“For Better or Worse” started running on the OWN network.

“The Haves and the Have Nots” is crime drama and soap opera created and produced by Tyler Perry. It was premiered on the Oprah Winfrey Network (OWN) this year. This was the first scripted television series to air on the network.

Another television series created by Tyler Perry is “Love Thy Neighbor” It started to broadcast on the OWN network in 2013 and ended in 2017.

2014: Perry was cast in the psychological thriller film “Gone Wild”. He got the role due to his performance as Alex Cross in the 2012 film of the same name.

“The Single Moms Club” A comedy-drama film is another project directed by Tyler Perry this year. He also starred as TK in the film.

A television version of the above film titled “If Loving You Is Wrong” written and directed Perry also premiered on OWN networks.

“Boo! A Madea Halloween” is another of Perry’s production in the “Madea” franchise. He also starred in this comedy horror film.

The film was a success like many others in the Madea series. It earned a total of $74.8 million against a $20 million budget.

He also lent his voice in the computer-animated Christian comedy film directed by Timothy Reckart “The Star”.

Perry published a second book titled “Higher is Waiting” which debuted at number 5 on the   New York Times Bestseller list.

Tyler Perry is not married. However, he has a partner named Gelila Bekele whom he has been with since 2009.

Bekele gave birth to their son Aman Tyler Perry in November of 2014.

He is Christian and loves gospel music and artists. He is a close friend to African American celebrities like Janet Jackson, Will Smith, and Oprah Winfrey.

He has lots of properties worth millions of dollars in Georgia, California, Wyoming, and the Bahamas.