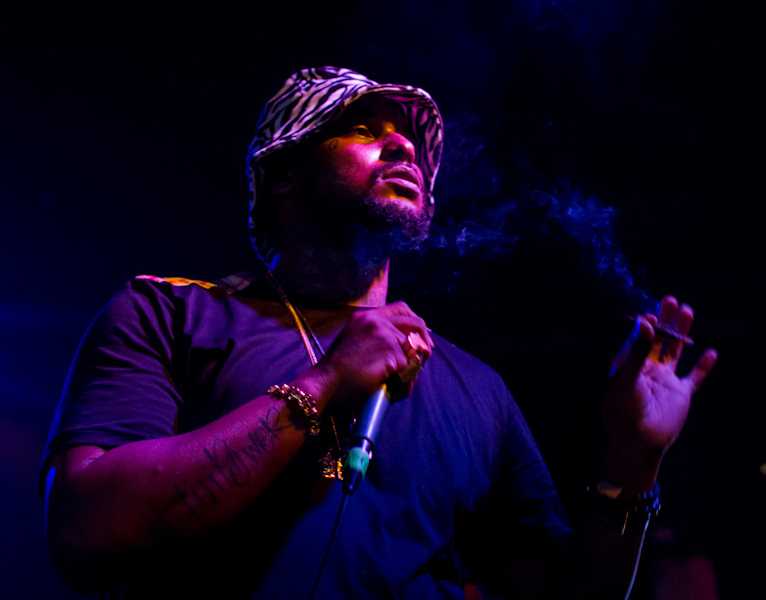 A multiple award-winning American hip hop artiste, he has made a good living for himself from his talent and obviously still has a lot more to give.

He is known for his versatile rapping style and has collaborated with many different famous artists including the likes of Ab-Soul, Jay Rock and Kendrick Lamar – his band-mate friends in the hip hop group ‘Black Hippy’.

His rapping style and musical success were influenced by top rappers like Jay-Z, 50 Cent, Nas, The Notorious B.I.G, Kurupt, and Tupac.

Schoolboy Q officially signed with Top Dawg Entertainment (TDE) in 2006 and had his real breakthrough after the release of his debut studio album “Oxymoron” in 2014.

Schoolboy Q’s source of wealth is mainly from the success and sales of his musical recordings.

He actually stuck gold good with the release of his major debut, “Oxymoron” in February of 2014.

He obviously also made a lot of money from the different musical tours he has done in the course of his career.

Schoolboy Q’s was born on October 29, 1986. His birth name was Quincy Mathew Hanley.

His birthplace was on a military base in Wiesbaden, Germany where his father worked as an American soldier.

He grew up from a broken home because his parents were divorced even before he was born.

After his birth, Quincy’s father remained in Germany continuing his duties in the US military. His mother, on the hand, moved with him to Texas for a couple of years, before they finally settled in California.

He grew up mainly in the South Central Los Angeles area.

He started school at John Muir Middle School. He attended Crenshaw High School where he graduated.

He went to different local colleges that include Glendale Community College and West Los Angeles College where he played football as a receiver and returner. That gave him the opportunity to play for the West Los Angeles Oilers.

As a teenager, Schoolboy Q was a troublesome kid. He joined a street gang called 52 Hoover Gangster Crips and started leading a criminal life like stealing, gang banging, and drug dealing.

He even sold hard drugs like Oxycontin, crack, and marijuana in the streets of Los Angeles.

In 2007, he was jailed for six months for a home invasion related crime. He finished the jail term on house arrest.

Despite his troublesome teenage years, Schoolboy Q always loved music and wrote some verses. His musical career actually started when he was 16 years.

2006: He started working with Top Dawg Entertainment (TDE), a record label based in Carson, California. In this studio, he got acquainted and collaborated with other artists.

2008: He recorded his first mixtape titled “schoolboy Turned Hustla” with Top Dawg and G.E.D Inc. This debut was based on his real-life experiences.

2009: Following the success of his mixtape, TDE officially signed Schoolboy Q as one of their artistes.

In May of this year, he released his second mixtape titled “Gansta & Soul”. This was his first official project with T.D.E.

The mixtape contains an infamous track titled “Ezell (40 Glocc Killa)” which depicts his short-lived rivalry with the fellow rapper known as 40 Glocc.

2010: Schoolboy Q toured the country with his fellow Black Hippy mates. There was no official project release in this year but he worked on an upcoming project.

This was Schoolboy Q’s studio album debut. This album was exclusively released through iTunes where close to 1000 digital copies were sold in its first week.

Very few copies were sold in Los Angeles. The album still reached top 100 in the US Billboard 200 chart, despite not being promoted.

2012: “Habits & Contradictions” the second independent album was released through iTunes.

The album received massive critical acclaim and sold over 3900 digital copies in the United States alone within the first week of sales.

Schoolboy also got involved in a lot of music videos after the release of this second independent album.

2013: Released “Collard Greens” the lead single in his debut album. He also made appearances in BET Awards show, “The Tonight Show” with Jay Leno, alongside other artistes, BET Hip Hop Awards, and the soundtrack to the video game ‘NBA Live 14’.

2014:  Schoolboy Q released ‘Oxymoron’. This was his third album.  This album was a huge commercial success. Over 139,000 copies were sold in its first week of release.

It reached number one on the Billboard 200 chart in Canada and on the US R&B/Hip-Hop and US Rap charts.

The album was a success just like the previous album. It did very well on the US Top R&B/Hip-Hop Albums billboard and even got to number two on the US Billboard 200. It also ranked 2 in the Canadian Albums Billboard.

Schoolboy Q has never been married but he two daughters. The first daughter named Joyce ‘joy’ Hanley was born 25, 2009, while the second daughter was born January 4, 2019.

Joyce was mentioned in several of Schoolboy Q’s songs and also appeared on several of his music videos. She was also featured on the cover of ‘Oxymoron’.

In 2013, it was rumored that Schoolboy Q slept with his fellow ‘Black Hippy’ Kendrick Lamar’s girlfriend. This was the reason for the official breakup of the group.