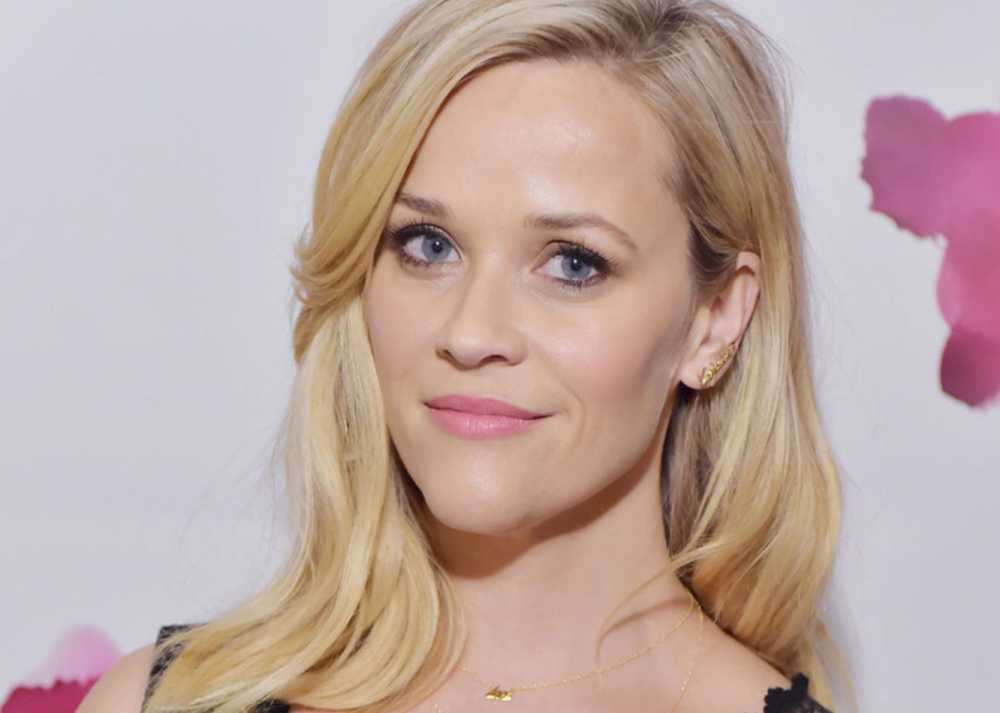 Reese Witherspoon’s net worth is estimated to be around $450 million dollars as of 2023.

She is one actress that has taken to the straight path to becoming what she is today. She did not discover acting by accident but she grew up in it.

At the age of 7, she was already a model and steadily climbed the celebrity rank as she grew older, earning a lot of money with every passing year.

It’s no surprising that her net worth is this staggering as she has made a lot of money from her acting career.

She was even reported as the fifth highest-paid actress in 2018 according to Forbes, earning a staggering $16.5 million in that year alone.

Most of the films she has starred in have been Box Office big hits, each of which earned her a lot of money.

By the way, if you want to start making money watching movies, click to read this article. It shows you real companies that pay those who want to watch movies for fun.

And of course if you want to earn money by acting in movies, you can start as a movie extra. You can read all about that from this article.

Her main source of wealth is the earnings from her acting career. Most of the movies she has been involved with have earned her a lot of money over the years.

Apart from her earnings in acting, she also earns good money from the production work and endorsement deals she’s involved in.

Some of the endorsement deals she had to sign include Expressions Fragrance, Avon, to mention a few.

Reese Witherspoon is also an entrepreneur making money as a mom. She owns a clothing line and fashion company called “Draper James”.

This company sells a wide range of clothing and other fashion accessories.

She started this business in 2015 and already it has been featured in top media platforms like PEOPLE, Vanity Fair, Oprah Magazine, and Coveteur.

The place of her birth is in New Orleans, Louisiana. However, she was raised in Nashville, Tennessee.

Her father was Dr. John Draper Witherspoon, and her mother is Dr. Mary Elizabeth “Betty” Witherspoon.  Her father is an Otolaryngologist while her mother was a professor of nursing at Vanderbilt University.

She attended Harding Academy for her middle school and then Harpeth Hall School in Nashville for her high school education.

After graduation from high school, she became a student at the prestigious Stanford University where she majored in English Literature.

However, she could not finish her studies at the university because she left to pursue a career in acting.

Also See: How You Can Get Paid Answering Questions and Get Paid Just Playing Quiz Online

1991: Witherspoon was cast as the main star in the film “Man in the Moon”. She played the role of Dani Trant.

Her performance impressed even the film critics at the time. She was also nominated for the Young Artist Award.

She was also cast as Ellie Perkins in the television film “Wildflower”. Other actors in this film included Beau Bridges, Susan Blakely, and Patricia Arquette.

1992: She portrayed a critically ill young girl in the TV movie titled “Desperate Choices: To Save My Child”

1993: Witherspoon played the role of Ferris Dunnigan, the young wife of Gregor in the CBS miniseries “Return to Lonesome Dove”.

She also starred in the adventure drama film “A Far Off Place” and played a minor role in the drama film “Jack the Bear”.

1996: Witherspoon starred in the black-comedy thriller film “Freeway” where her role was Vanessa Lutz, a poor Los Angeles girl that encounters a serial killer.

She was also cast in “Fear” as a teenage girl named Nicole Walker who dated a man with obsessive tendencies.

Her role in “Freeway” earned her positive reviews. She also won the Best Actress Award at the Cognac Police Film Festival.

1998: She starred in three major films this year. These include “Twilight” “Overnight Delivery” and “Pleasantville”.

She garnered the Young Hollywood Award for Best Female Breakthrough for her portrayal of Jenifer in “Pleasantville”.

“Election” is another film that she starred in this year. Her role as Tracy Flick received critical acclaim. She also won the Best Actress Award from the National Society of Film Critics and the Online Film Critics Society.

She also received her first Golden Globe nomination as well as an Independent Spirit Award nomination.

Apart from those, Witherspoon was listed in the 100 Greatest Film Performance of All Time by Premiere Magazine.

2000: She made a cameo appearance and played the mother of the Antichrist in the film “Little Nicky”.

“American Psycho” is another film which Witherspoon starred in this year. Actually, she played a supporting role in this film as the trophy girlfriend of Patrick Bateman.

2001: Witherspoon starred in the film that turned her career around for the good “Legally Blonde“. She portrayed Elle Woods.

The film went on to become a box-office hit. It grossed over $96 million in the United States.

For her performance in this film, Witherspoon was nominated for her second Golden Globe Best Actress award. She also won the Best Comedic Performance award at the 2002 MTV Movie Awards.

She played a voice role in “The Trumpet of the Swan”,

2002: Witherspoon starred in an episode of the television show “The Simpsons”. She was cast Greta Wolfcaste in the “The Bart Wants What it Wants” episode.

The played the role of Cecily in the comedy “The Importance of Being Earnest”. Her performance in this comedy earned her a Teen Choice Award nomination.

This year, she starred in the film “Sweet Home Alabama” where she played the role of Melanie Carmichael a young fashion designer who wants to marry a New York politician. To fulfill that dream, she must return to Alabama to divorce her childhood sweetheart whom she has been separated for seven years.

This film was a hit and Witherspoon’s performance was praised even though the film itself received negative reviews.

The film grossed over $127 million in the US. It was her live-action box office hit so far. In the opening weekend alone, the movie earned $35 million.

Talking about money making hobbies like acting that makes Reese a lot of money, below are some other hobbies that can make you money while doing what you love:

In this movie, Elle Woods is now a Harvard-educated lawyer with the passion to protect animals from the cosmetics industry science test.

This sequel grossed $90 million in the US. Witherspoon received a paycheck of $15 million for her role in this sequel.

2004: She was cast as Becky Sharp in “Vanity Fair”. During the filming of this movie, Witherspoon was pregnant with her second child. Thus, she was carefully costumed to conceal her pregnancy.

Nevertheless, she played her role as the poor Becky Sharp who has ruthless determination to become rich and establish herself in society.

2005: She featured in two films this year. She portrayed June Carter Cash the wife of popular singer Johnny Cash in the movie “Walk the Line”.

She played the character of Elizabeth Masterson in the romantic comedy “Just like Heaven”.

She won an Oscar or the Academy Award for Best Actress for her lead role in “Walk the Line”.

Other awards she won for the performance in this film include the Golden Globe Award, the Screen Actors Guild, and the BAFTA awards.

2006: Witherspoon played the role of Annie in the film that her Type a Films company produced “Penelope”.

2007: She appeared in the abduction thriller film “Rendition”. Her role was that of Isabella El-Ibrahim, the pregnant wife of a bombing suspect. Her role in this film received negative reviews.

It’s not surprising since the filming coincided with a period she was dealing with separation and divorce from her first husband.

2008: “Four Christmases” was a holiday comedy that Witherspoon was cast. The film was a box office success having earned more than $120 million in the US and more than $157 million worldwide.

2010: Witherspoon was cast in the lead role in the romantic comedy film “How Do You Know”. However, this film did not do well in the box office as its earnings were poor and its ratings were poor as well.

2011: She played the character of Marlena, a glamorous performer stuck in a marriage to a volatile husband but intrigued by a circus’ new veterinarian. She played this role in the love-triangle movie called “Water for Elephants”. It received mixed critical reviews.

2012: Witherspoon was cast in another love-triangle film titled “This Means War”. She was at the center of a battle between two friends who are in love with her. However, this film did poorly at the box office.

She played a minor role as Juniper, the former girlfriend of a fugitive in the coming-of-age drama “Mud”.

2013: She starred in “Devil’s Knot”, a film that was based on the true-crime book of the same name. She played the role of Pamela Hobbs, a mother of three young murder victims.

2014: Witherspoon starred as Carrie Davis in the film “The Good Lie”. This is a film based on real-life events about a woman who was assigned to help four young Sudanese refugees.

She produced the films “Gone Girl” as well as “Wild”, where she also played the role of Cheryl Strayed.

Another film she starred in is “Inherent Vice”. In this film, Witherspoon played the role of Penny Kimball.

2015: Witherspoon played the character of a police officer trying to protect a drug lord’s widow in the comedy “Hot Pursuit”.

2016: She played had a voice role in the animated film “Sing”. This became her biggest hit film. It earned over $200 million domestically and $600 million worldwide.

2018: She began hosting the talk show “Shine On with Reese” aired on DirecTV. She also played she plays Mrs. Whatsit in the Disney’s “A Wrinkle in Time”.

Reese Witherspoon started dating actor Ryan Philippe in 1997. Their relationship blossomed and they got married in 1999. The marriage took place near Charleston, South Carolina.

The couple has two children together. Their names and birth dates are Ava Elizabeth Philippe, their daughter, born in September of 1999, Deacon Reese Philippe, their son, born in October of 2003.

Reese started dating a talent agent named Jim Toth in 2010. They married in 2011. They have a son together. His name is Tennessee born in September of 2012.