This article reveals a lot about Pizza franchises and tips to help you, if you are considering one. It also reveals some of the best ones to consider.

Imagine if you will taking a microphone, camera, and recorder out onto the street and conducting a random survey about people’s favorite food.

Most probably you would get a broad spectrum of choices and various cuisines that people enjoy. For example, someone may specifically say Chinese food, Italian food, American cuisine, Thai, etc.

As a follow-up question, you might ask what specific food they enjoy?

Most likely the standard answers would be hamburgers and fries, ribs, steak, chicken, etc. You would get a variety of answers from each of the individuals that you asked.

However, one would probably guess accurately if there was one common food eaten by a majority of people.

Consequently, if asking an individual who was considering the investment in a franchise, the best advice for that individual to explore as a franchise opportunity would be a pizza franchise.

A pizza franchise would have a greater percentage of success due to the popularity of pizza and the number of pizza franchises available that an individual can consider.

It is also important to do one’s homework when investigating whether to enter into the pizza restaurant industry before spreading that particular delicious pizza sauce.

Some of the important aspects of doing one’s research before diving into that wonderful pizza crust are knowing one’s market, a saturation of the industry, return on one’s investment and the actual cost of purchasing a franchise, and how the franchise process works.

On a personal note, my experience with the various pizza franchises has been simply an eager recipient of this wonderfully and heavenly-made food from the ovens above.

However, one particular antidote was while living in Oregon I was introduced to Papa Murphy’s pizza. The Papa Murphy’s franchise makes the pizza for you and you take it home and bake it yourself.

The running joke then became for me while living in Oregon, at the time, was you weren’t able to pump your gas and you had to bake your pizza.

However, I and our family have been hooked on Papa Murphy’s pizza. It is one of my favorites if not the favorite pizza franchise for our family.

5 Best Pizza Franchises to Own

Below is a list of some of the best pizza franchises based on several factors.

Also, a few proven tips that the future entrepreneur may find useful in realizing their success with this popular food and exploring franchise opportunities.

The franchise opportunities are not listed in any certain order but reflect some significant delicious pizza differences in style, taste, and specific niche in the pizza franchise industry

When rating the top franchises based on the number of total franchises alone, the supreme pizza franchise would be Domino’s.

Their popularity and success have always been based upon providing convenient customer service to its pizza customers. This particular chain has been around for over 50 years and boasts of over 17,000 franchises.

Because it not only sells pizza but speed and convenience to its customers they are always investing in ways to facilitate customer satisfaction. They accomplish this by using simple technology to make the ordering of pizzas a convenient and easy experience.

The franchise fee to obtain a Domino’s location starts at $10,000.

From that point forward the initial investment that should be anticipated by the investor should range anywhere from 100,000 to about $600,000.

Papa John’s is a classic success story of how the founding business owner started small and grew his company to become one of the more popular pizza delivery companies.

The founder, John Schnatter, started the business in a broom closet in his father’s tavern, sold his beloved 1971 Camaro Z 28, and with that sacrifice purchased $1,600 worth of used pizza equipment.

Along with his innovation of pizza dipping sauce, the rest they say is history.

Who would’ve ever thought that a 1971 Camaro Z 28 would turn into something so tasty? 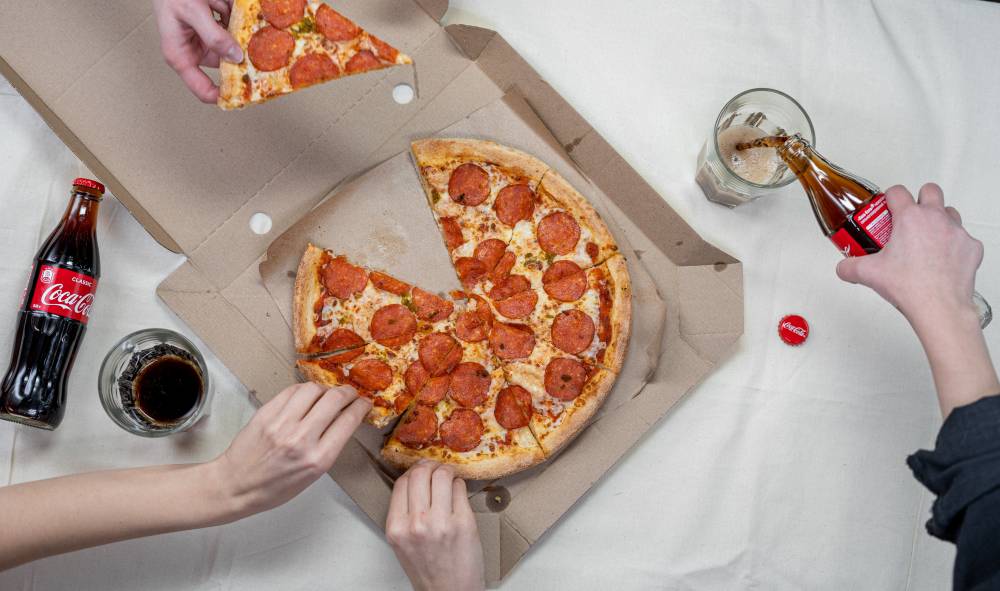 The second-largest and one of the most iconic pizza restaurants that have baked to perfection its pizzas is Pizza Hut.

Over 58 years ago, the delicious pizzas produced by Pizza Hut were founded by two successful businessmen and brothers by the name of Dan and Frank Carney.

Their success is based on many business pizza models and innovations.

Those innovations include dining experiences for their customers which included restaurants offering the family the opportunity to sit at red-checkered tablecloths or, in keeping up with other delivery franchises offering carryout franchise outlets.

Check out How the following Businesses Make money:

One of the top pizza franchises that have enjoyed success since 1959 is represented by a little Roman cartoon character, dressed in a toga and goes around proclaiming “Pizza! Pizza!”

If you guessed Little Caesars you would be correct.

This pizza chain is successful because of its marketing strategy of utilizing this cartoon Roman character dressed in a toga and airing very funny pizza commercials.

In addition, Little Caesars is very competitive as to the low cost of their pizza and the value of this delicious pizza pie.

A little Caesars franchise opportunity will require an initial investment range anywhere from $250-$335,500 with the franchise fee being $20,000.

As an added endorsement from this writer, little Caesars would always offer its unclaimed pizzas and wrongly made pizzas to the local food bank and noon lunch program for the needy.

Also See: How To Get Paid to Taste Food for Food Tasting Jobs.

The storied history of Papa Murphy’s had its beginnings in Hillsboro, Oregon in 1981.

At this time the chain was known as Papa Aldo’s Pizza chain and three short years later Murphy’s Pizza chain began operating in California in the city of Petaluma.

Subsequently, both chains were married together in the kitchen by an entrepreneur named Terry Collins who renamed the chain Papa Murphy’s.

As stated earlier in this narrative Papa Murphy’s fulfills a certain niche in the pizza market in that the staff at the local franchise prepares the pizza and then the customer takes it home and prepares the pizza by baking the delicious pie at 425°F.

This particular franchise boasts of over 1,300 operations around the United States and Canada and in the country of the United Arab Emirates.

Like most pizza franchises, Papa Murphy’s takes great pride in its ingredients.

Specifically, Papa Murphy’s pizza chain claims that it doesn’t lavish its cheese toppings from a bag and that the pizza dough is not pre-made but from scratch.

They also share with the customer and consumer that they lovingly chop the other toppings, like veggies, by hand.

The initial fee for gaining a franchise with Papa Murphy’s franchise is $25,000. The anticipated startup costs with these franchises range anywhere from $450-$750,000.

Tip #1: Not All Pizza Is Made the Same

As one can imagine, being successful in the pizza industry, you just don’t simply turn on the oven put in the prepared pizza, bake it until it is thoroughly cooked, and then deliver it to your customers.

In other words, what franchise you wish to join in the kitchen is dependent upon the pizza you wish to offer.

Will your customers want to dine in or out, bake their pizza, will you offer specialty pizzas (vegan, cauliflower crust, gluten-free, etc)?

Therefore, your business vision, pizza menu, and personal financial importance and resources should match the franchise and product they offer.

To be successful, the cost of operation is a critical component of consideration. All though pizza is a popular menu idea there is no guarantee of success and staying in business.

To consider the full commitment, a good strategy is to talk to someone with experience who has gone through the franchise process.

Additionally, insight may be provided for questions not even thought about or the raising of additional questions providing valuable insight and answers.

Tip #3: Wake up and Smell the Pizza

Like any other business partner endeavor, it is critical to know what you’re getting into and whether you are a good fit with the potential partner and vice versa.

Part of that partnership information includes the franchise’s expectations and your expectations.

Do they match or are there caveats that weren’t expected?

For example, are there one-time fees and ongoing fees, such as royalty or advertising fees, that need to be paid consistently to the franchise pizza company?

Communicate with the pizza franchise and receive all of the franchise information available.

Talk to the franchise division of the company and determine their level of support for franchises before and after the franchise agreement is entered into.

Also, does the franchise company set the new business owner up for success?

In other words, do they have a training program and is it thorough to provide the tools necessary for the franchise owner to succeed?

Do they provide the proper training and tools?

You Can Do This: Warmth of The Franchise Kitchen

As long as there are sporting events, birthdays, special eating out occasions, and pizza night, the love affair of pizza and Americans will continue.

Consequently, there is a continual need for families to get their pizza fix.

You have the business acumen and the drive to succeed.

Perhaps, gather the family members together and make it a family investment and therefore a family business in which each is committed to this new challenge of operating a pizza franchise.

Do your homework, investigate the franchises thoroughly and then roll up your sleeves and get into that pizza kitchen.

Kneading the dough goes towards rolling in the “dough.”

Looking at investing in a pizza franchise?

You already knew that it was more than putting up that franchise’s logo, switching on the lights, firing up the oven, and making the pizza according to the franchise’s specifications.

Perhaps, you didn’t know that there was a considerable chunk of time required for training purposes as per any franchise agreement.

Or perhaps you didn’t know that there were monthly royalty or advertisement fees associated with owning a pizza franchise.

Or perhaps you didn’t know that not only was there a franchise fee but there were requirements as far as having a certain amount of money liquid as required by the franchise agreement.

Or perhaps you didn’t know that once the initial cost of the franchise agreement was entered into that there would be associated significant costs anticipated with running a franchise.

The pizza restaurant industry is a thriving food business opportunity and one that will be around for some time to come due to people’s love and appreciation for this delicious food.

However, it is also important to note that the food industry is changing and individuals are becoming more cognizant of their dietary habits and wanting to eat healthy.

Perhaps, this health awareness of individuals will spill over even deeper into the deep-dish pizzas that are available today.