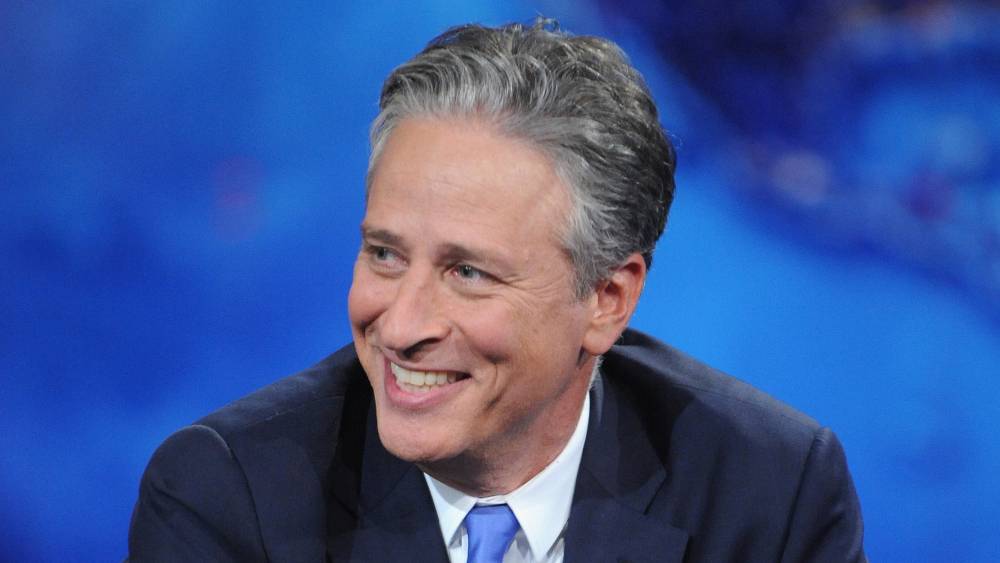 He has also appeared in numerous films and TV shows since he became professionally active from 1987.

The wealth he has accumulated is not surprising as he wears many hats doing comedy, producing, directing, starring at movies, hosting television shows, writing books, and commenting on interesting political topics.

His main source of wealth include earnings he accumulated over the years as a TV host and as an actor.

For instance, at at 2013 he was receiving an annual salary of between $25 million and $30 million!

He also made many millions of dollars as a producer and comedian over the years.

He has also made a lot of money from books published over the years. For example, “America (The Book): A Citizen’s Guide to Democracy Inaction” sold millions of copies when it was published.

Jon Stewart was born on November 28, 1962. His full name at birth was Jonathan Stuart Leibowitz.

He is the second of four sons born to Donald Leibowitz and Marian Leibowitz. His older brother is named Lawrence while his two younger brothers are named Dan and Mathew.

His parents have Jewish emigrants who are from central and Eastern Europe like Poland, Ukraine, and Belarus.

Stewart’s parents have a strong educational background. His father was a professor of Physics at The College of New Jersey and also at the Thomas Edison State College.

His mother, Marian was a school teacher and also an educational consultant.

His parents divorced when he was seven years old and he became estranged from his father. He dropped his surname and started using his middle name “Stuart” but legally changed his surname to “Stewart” in 2001.

Stewart attended Lawrence High School, in Lawrenceville, New Jersey. He later enrolled at The College of William & Mary in Virginia and graduated in 1984 with a degree in Psychology.

Before this, he had majored in chemistry.

He played football at college and briefly joined the Pi Kappa Alpha Fraternity.

Stewart did lots of jobs after his graduation from college. He worked in different positions at the New Jersey Department of Human Services, The City University of New York, and Gloucester High School in Virginia, and the City Gardens in Trenton, New Jersey.

Talking about lots of jobs Stewart did after graduation from college, below are detailed articles right here on Kingged.com about some jobs that pay very well:

While working at the City Garden as a bartender, Stewart developed an interest in comedy and this inspired him to pursue a career as a funny man.

In 1986 moved to New York City to start a career as a comedian.

1987: Steward made his stand-up debut at The Bitter End – a 230-person capacity nightclub, coffeehouse and folk music venue in New York City.

He also adopted the stage name Jon Stewart, and he went on to perform regularly at the Comedy Cellar – a comedy club in Manhattan, New York City. This he did for two years to hone his comedy skills.

1989: He was hired as a writer for “Caroline’s Comedy Hour”. This became his first television job.

1990: This year, Steward was made a co-host of “Short Attention Span Theater”. His co-host in this program was Patty Rosborough. In this TV series, he presented short segments of stand-up comedy acts and scenes from films airing on HBO and Cinemax.

1992: Stewart hosted “You Wrote It, You Watch It” – a sketch comedy series that aired on MTV. The show was short-lived as it was canceled the following year.

1993: He launched “The Jon Stewart Show“. This was a talk show that aired on the MTV network. The show was an instant hit as it was highly rated just behind another show aired on MTV titled “Beavis and Butt-Head”.

1995: The Jon Stewart Show was canceled this year after a dismal rating. Stewart became a frequent guest host at “The Late Show with Tom Snyder”.

He signed a three year deal with Miramax, an entertainment and film distribution company.

1996: “Where’s Elvis This Week?” was another short-lived talk show that Jon Stewart hosted.

This show featured a set of panelists who discussed current issues. It was aired in the UK on BBC Two even as it was filmed at the CBS Broadcast Center in New York City.

He was a regular guest celebrity at “The Larry Sanders Show”.

1997: Stewart played a leading role in the film “Wishful Thinking”.

1998: His first book titled “Naked Pictures of Famous People” was released this year. The book is a collection of humorous short stories and essays. It was widely accepted and it made “The New York Times Best Seller List”.

He featured in the film “Playing by Heart” as Trent. Other films he starred in this year is the comedy film “Since You’ve Been Gone” and the horror film “The Faculty”.

Stewart also starred in “Half Baked” a stoner comedy film.

1999: He started hosting the humorous show “The Daily Show” on Comedy Central. He got this role to replace the former host Craig Kilborn.

His role and appearances in this show would later win him a total of twenty Primetime Emmy Awards.

2000: The Daily Show under Stewart received the Peabody Awards for its coverage of the 2000 presidential election under Comedy Central’s “Indecision 2000”.

2001: He was a cast of the comedy film written and directed by Kevin Smith titled “Jay and Silent Bob Strike Back”.

2004: In this year, The Daily Show under Steward won another Peabody Award for its program “Indecision 2004”.

Steward and the writing staff of The Daily Show released a mock high-school history textbook titled “America (The Book): A Citizen’s Guide to Democracy Inaction”. This book is all about the American political system and its institutions.

This book ended up as the year’s top-fifteen best seller. It sold millions of copies.

2005: Stewart received the Grammy Award for Best Comedy Album for the audiobook edition of “America (The Book): A Citizen’s Guide to Democracy Inaction”.

2006: Stewart starred as Zeebad in “Doogal”, an American version of the 2005 French-British computer-animated adventure fantasy film “The Magic Roundabout”.

He appeared as a celebrity fan in the documentary film titled “Wordplay”.

2012: Stewart interviewed Bruce Springsteen, an American singer, songwriter, and musician who is both a solo artist and the leader of the E Street Band. The interview was for Rolling Stone.

The interview was for the cover story of the March 16th issue of the Rolling Stone.

2017: Stewart’s first stand-up special after 11 years was announced by HBO.

Jon Stewart started dating his Tracey Lynn McShane in 1997. The couple dated four years before they got married in 2000.

They are happily married with two children conceived through in vitro fertilization. Their names are Nathan Thomas Stewart born July 3, 2004, and Maggie Rose Stewart born February 4, 2006.

He is known to express his comments on current affairs and also to air his views and criticisms on journalists, media outfits, political parties, and governments. Of course, he expressed his strong personal ideas.

Stewart has received many awards including been named in 2005 Time Magazine 100 most influential people.

He is now a vegan just like his wife.