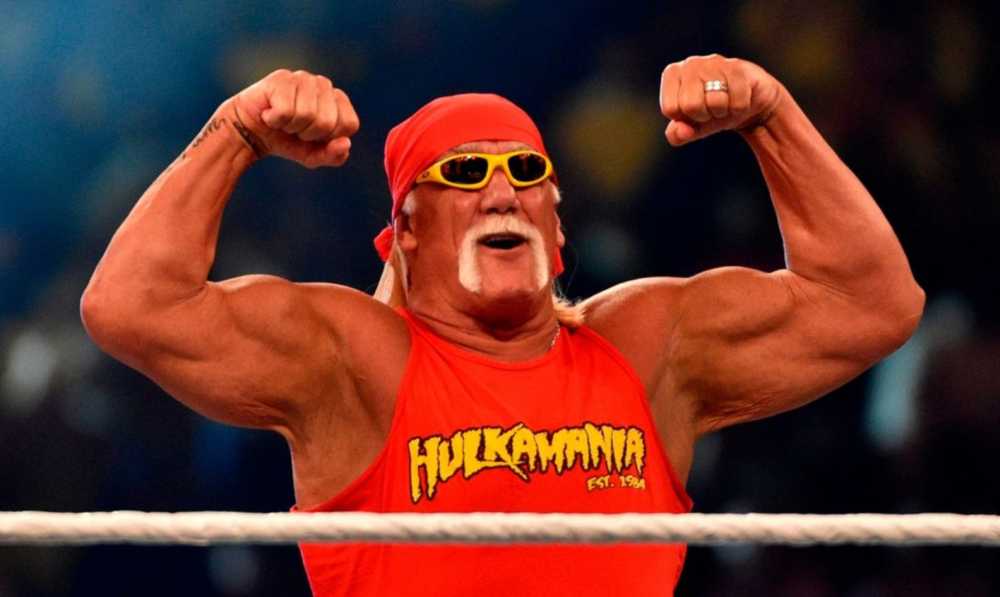 Hulk Hogan’s net worth is estimated to be over $25 million dollars as of 2020.

Born Terry Gene Bollea on the 11th of August 1953, he is the very famous former WWE Star who stole the hearts of wrestling fans around the world in the 1980s and early 1990s.

Without any doubts, he can be said to have really put up some of the best wrestling performances of any wrestler at the height of his career.

Hulk Hogan has also appeared in a lot of films in different acting roles. He is also a musician and a TV personality. He also runs a couple of businesses as an entrepreneur.

If you are a fan of professional wrestling then you must know that he is a thirteen-time World Champion. He won in many categories and in many championships.

Above all, he is a WWE Hall of Famer.

Hulk Hogan’s list of in-ring and out-ring successes is inexhaustible. Even though he’s no longer as rich as he once was, he still makes good money using his name and fame.

Hulk Hogan’s major sources wealth includes his yearly salaries and contracts with WWE, his earnings from the movies he appeared in and the different television programs he has featured in.

Hogan also makes money from endorsements and partnership deals with brands, sales of his many merchandise, stock ownership and various business ventures.

Talking about sales of merchandise and business ventures he’s involved in, below are articles right here on Kingged.com for those interested in business:

Just like all the other articles on this site, the above articles are completely free to read and they really contain helpful tips.

Hulk Hogan is the ring name of Terry Gene Bollea. He was born on the 11th of August, 1953. His birthplace is in Augusta, Georgia.

Hogan is linked to French, Italian, Panamanian, and Scottish ancestry.

His family moved to Port Tampa in Florida when he was just one and a half years old. He grew up in Florida and attended high school there.

He developed interests in baseball and wrestling at an early age. He was inspired by former professional wrestlers like Dusty Rhodes and Superstar Billy Graham.

Hogan later enrolled at Hillsborough Community College. He enjoyed playing the bass guitar as a musician during his college days. He also collaborated with several Florida-based rock bands.

Hogan decided to drop out of the University of South Florida before receiving a degree. He went on to pursue his music career.

During this time, he started attending gyms to build up his physique.

He got the attention of former wrestlers named Jack and Gerald Brisco (both brothers). They worked on getting Mike Graham, a wrestling promoter, to put Hogan in the ring.

He was introduced to Vince J. McMahon who was impressed with his physical stature and charisma. He started wrestling in the World Wrestling Federation.

He defeated Harry Valdez and Ted DiBiase on different occasions. He also started feuding with Andre the Giant.

1980: Hogan appeared in the New Japan Pro-Wrestling (NJPW) even though he was still with the WWF. He faced different opponents in the NJPW that included Tatsumi Fujinami and Abdullah the Butcher.

He was nicknamed “Ichiban”(which translates to “Number One”) by the Japanese fans.  He used different wrestling styles that impressed fans.

1981: He was defeated by Pedro Morales for the Intercontinental Championship at WWF. Hogan also made other appearances for the WWF this year.

He also became the first holder of IWGP Heavyweight Championship.

The duo of Hogan and Inoki won the MSG (Madison Square Garden) Tag League tournament for the second year in a row.

However, he still lost the title to Inoki via a count-out.

1985: Hogan teamed up with Mr. T to defeat the duo of “Rowdy” Roddy Piper and “Mr. Wonderful” Paul Orndorff.

He also successfully defended his WWF World Heavyweight Championship against “Cowboy” Bob Orton at the Saturday Night’s Main Event I.

On Saturday Night’s Main Event II he also successfully defended his title against Nikolai Volkoff in a flag match.

1988: Hogan lost the WWF World Heavyweight Championship against Andre the Giant at The Main Event 1.

The WWF World Heavyweight Championship was vacated as Andre the Giant handed over the belt to “The Million Dollar Man” Ted DiBiase.

However, he helped “Macho Man” Randy Savage to defeat Ted DiBiase to win the championship title.

Hogan, Savage, and manager Miss Elizabeth formed a team known as “The Mega Powers”. They defeated other teams like “The Mega Bucks” and the team of Akeem and Big Boss Man.

He successfully defended and retained the title against Savage in their official WrestleMania rematch on October 10, the London Arena.

1990: He won the 1990 Royal Rumble match. He later dropped the title to Intercontinental Champion, The Ultimate Warrior, in a title versus title match at WrestleMania VI.

1991: Hogan also won the 1991 edition of the Royal Rumble match. At WrestleMania VII he defeated Sgt. Slaughter to win the WWF Championship.

He also won the rematch at the London Arena.

Hogan lost the WWF Championship to The Undertaker at Survivor Series. However, he won the title back at This Tuesday in Texas.

Due to interference in both matches by Rick Flair, the title was declared vacant.

1992: At Royal Rumble, Hogan could not regain the WWF Championship title as he was eliminated by Sid Justice. Rick Flair eventually became the winner.

At WrestleMania VIII, he defeated Sid Justice via disqualification due to interference from Harvey Wippleman.

1993:  At WrestleMania IX, Hogan teamed up with Brutus Beefcake to via for the WWF Tag Team Championship against Money Inc. (Irwin R. Schyster and “The Million Dollar Man” Ted DiBiase).

He won the WWF Championship for the fifth time against Yokozuna.

At the first King of Ring Pay-per-view event, Yokozuna defeated Hogan by pinfall.

He returned to NJPW to wrestle against The Great Muta for the WWF Champion. The match a dream match at Wrestling Dontaku. Hogan won.

1994: Hogan defeated Tatsumi Fujinami in the NJPW. This became his last match in Japan.

He signed with World Championship Wrestling (WCW) and won the WCW World Heavyweight Championship in his debut match against Ric Flair at Bash at the Beach.

He successfully defended the championship against Ric Flair, The Butcher, and Vader at separate matches.

He dropped the title via disqualification at Halloween Havoc to The Giant.

At SuperBrawl VI, Hogan defeated The Giant. Their feud started after The Giant cost Hogan the WCW Championship at World War 3 (a 60-man three-ring battle royal).

He lost the title to Luger by submission at an episode of the Nitro. However, at Road Wild, Hogan defeated Luger to regain the WCW World Heavyweight Championship.

1999: After years of defense of the title, Hogan lost the WCW World Heavyweight Championship to Ric Flair at Uncensored in a steel cage First Blood match.

He defeated Savage to regain the world title for the sixth time.

2002: Hogan was defeated by The Rock at WrestleMania X8. However, he reconciled with The Rock and fought off opponents like Hall and Nash.

At Backlash, Hogan defeated Triple H to win the WWF Championship.  He lost the title to The Undertaker at Judgment Day.

He lost to Kurt Angle at the King of the Ring. At SmackDown, Hogan and Edge teamed up to win the WWE Tag Team Championship.

They defeated Billy and Chuck to capture the title. They lost this title to Christian and Lance Storm at Vengeance. Hogan was defeated by Brock Lesnar by Submission in a main event singles match.

2003: At WrestleMania XIX, Hogan defeated Mr. McMahon. After displeasure with WWE, Hogan quit the brand and returned to Japan for the NJPW.  At Ultimate Crush II he defeated Masahiro Chono in the Tokyo Dome.

2005: Hogan was inducted into the WWE Hall of Fame class of 2005. The induction was done by actor Sylvester Stallone who is also a friend of Hogan.

He defeated Shawn Michaels at SummerSlam.

2006: Before WrestleMania 22, Hogan was given the honor to induct his friend Gene Okerlund into the WWE Hall of Fame class of 2006.

He defeated Randy Orton at SummerSlam.

2009: Hogan embarked on a tour with other wrestlers to Australia. The tour was titled “Hulkamania: Let the Battle Begin”. He defeated Ric Flair in four matches.

2010: He appeared at Bound for Glory as a villain to help Jeff Hardy to win the vacant TNA World Heavyweight Championship.

2011: He declared himself as the new owner of TNA after winning a court battle against Dixie Carter.

Hogan cost Sting the TNA World Heavyweight Championship at Hardcore Justice. Hogan was defeated by Sting at Bound for Glory. This brought his reign as president of TNA to an end.

Hogan faced a scandal in which a recording of his was released and on which he made racial remarks and expressed disgusts against black men that had any relationship with his daughter.

He would later apologize stating that what he said is “language that is offensive and inconsistent with [his] own beliefs”.

This scandal affected his endorsements with many brands including WWE which terminated his contract and stated that they are “committed to embracing and celebrating individuals from all backgrounds”.

Hogan also pleaded for forgiveness and many African American wrestlers expressed their support for him, and they also stressed forgiveness for him.

2018: Hogan was reinstated into the WWE Hall of Fame. He was made the host of Crown Jewel.

2019: He inducted his longtime friend Brutus Beefcake into the WWE Hall of Fame. Hogan appeared as part of the “Raw Reunion” special.

Hulk Hogan married Linda Claridge in December of 1983. The couple have two children together. A daughter named Brooke, born in 1988, and a son named Nick, born in 1990.

Linda filed for divorce following an affair that Hogan had with Christiane Plante in 2007. Hogan denied ever cheating on her. In the divorce settlement, Hogan retained 30% of the couple’s liquid assets totaling around $10 million.

Hogan started a relationship with Jennifer Mc Daniel in 2008. They eventually got married in 2010.

Health-wise, Hogan suffered a severe back problem. He underwent many procedures that provided temporary relief.

In 2013, he filed a medical malpractice suit against the Laser Spine Institute for persuading him to undergo a series of “unnecessary and even ineffective” spinal operations that aggravated his back problems. He sought $50 million in compensation.

He later underwent a traditional spinal fusion surgery that enabled him to return to his professional activities.

Talking about his health issues, below are some articles on this Kingged.com website for those who may have health issues related to weight:

Hulk Hogan has been involved in some legal issues in his career. In 1985, the host of the talk show “Hot Properties” sued Hogan for $5 million after Hogan put him in a modified Guillotine choke that caused pass out, sustain a head injury and underwent brief hospitalization.

The case was later settled out of court.

In 1994, Hogan testified in favor of Vince McMahon as a witness. His testimony prevented the government from prosecuting McMahon for shipment of steroids.

In 2016, Hogan was awarded $115 million as damages against Gawker Media for defamation, loss of privacy, emotional pain after a sex tape between Hogan and Heather Clem was released in 2012.

He later reached an agreement with the media house in November, for a $31 million settlement.