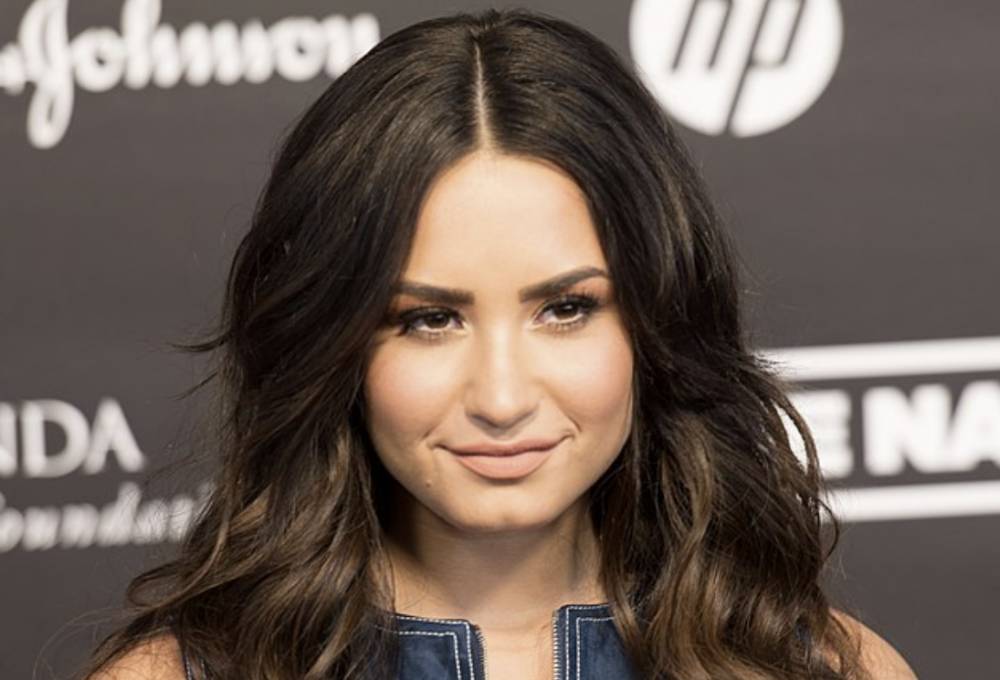 She started out as a teen and has grown to be celebrity admired by her huge fan base around the world.

The main source of Demi Lovato’s wealth comes from sales of her music over the years.

She also makes money from endorsements and deals with various brands.

She has also made a lot of money from appearing in TV shows, including being a judge and mentor in the reality television music competition “The X Factor”. It was reported she even got paid as much as $1 million dollars mentoring the “Young Adult” category.

She has also earned a lot from the many tours she has done around the world. The first was in 2014, called “Demi World Tour” and covered 25 cities.

She has also made money as an entrepreneur, even launching a skincare line called “Devonne by Demi”.

Also See: How To Make Money With Instagram Sponsorship.

Demi Lovato was born on the 20th of August, 1992. Her birthplace is Albuquerque, New Mexico.

Her father is an engineer and musician named Patrick Martin Lovato. He is of Mexican, Spanish, and Native American ancestry.

Her mother is Dianna De La Garza (née Dianna Lee Smith), she was a former Dallas Cowboys cheerleader. She has English and Irish ancestry.

Demi Lovato has done a DNA test to discover that she also has one percent African and sixteen percent Scandinavian descent.

She was raised in Dallas, Texas. Her high school diploma was obtained through homeschooling. One of the reasons she was homeschooled was because she was harshly bullied.

At a tender age of seven, she began playing the piano. When she became 10 she played the guitar. This period, she also attended dancing and acting classes.

2006: She played the role of Danielle Curtin in the “First Down” episode of the TV series “Prison Break”.

2007: She appeared in “Just Jordan”, a television sitcom that aired on Nickelodeon. She played the role of “Nicole”.

She was the lead role Charlotte Adams in the TV series “As the Bell Rings”.

2008: She featured in the television film “Camp Rock” as Mitchie Torres. This Disney Channel Original Movie got high ratings and received more than 8.86 million viewers.

The soundtrack of this movie debuted at number three on the US Billboard 200 chart. Also, about 188,000 units sold.

In September, Lovato released her studio album “Don’t Forget”. It was met with generally positive reviews from critics. Most of the tracks were pop rocks.

The albums lead single “Get Back” and “La La Land” peaked at number 43 and number 52 on the Billboard Hot 100.

2009: She recorded a song titled “Send it on” to support Disney’s Friends for Change. The song featured co-stars like Jonas Brothers, Miley Cyrus, and Selena Gomez.

It’s worth noting that all proceeds from this song were donated to environmental charities which were supported by the Disney Worldwide Conservation Fund.

She also appeared in TV shows and films this year. Some of the sitcoms she appeared on include: “Sonny with a Chance” where she played the lead role as Sonny Munroe.

She also appeared in the concert film “Jonas Brothers: The 3D Concert Experience” and in the television film “Princes Protection Program” where she portrayed Rosie Gonzalez / Rosalinda Maria Montoya Fiore.

2010: Demi and Joe Jonas recorded another single for charity and for Disney’s Friends for Change. The title of this song is “Make a Wave”.

She appeared in season six of the medical TV series “Grey’s Anatomy”. She played the role of Hayley May who is a teenage schizophrenic.

She went on her first International Tour named the “South American Tour”. She also performed as a guest in “Jonas Brothers: Live in Concert”.

She reprised her role as Mitchie Torres in the second part of the film Camp Rock. The title of the new film is “Camp Rock 2: The Final Jam”. The film premiered to eight million viewers.

This made the film the number-one cable-television movie of the year by the number of viewers. The soundtrack peaked at number three on the Billboard 200, with about 41,000 copies sold.

2011: Lovato released her third studio album called “Unbroken”. This work was more of R&B than of pop-rock which her first two albums focused on. The album received mixed criticisms.

It sold well over 97,000 copies in her first week of release.

The lead single of this album “Skyscraper” was downloaded 176,000 times making the highest sales in any of her tracks since 2008 released “This is me”.

2012: At the 2012 MTV Video Music Awards, “Skyscraper” won the Best Video with a Message Award. It got a Platinum certification by the RIAA.

“Give Your Heart a Break” was released in January 2012. It peaked at number 16 on the Billboard Hot 100 chart. Over 2.1 million digital copies were sold.

Demi Lovato was included as a judge and mentor at the second season of the reality television music competition “The X Factor”. She joined other celebrities like Britney Spears, Simon Cowell, and L.A. Reid at the show.

Lovato mentored the “Young Adult” category. It was reported that she was paid a $1 million salary for this show.

2013: “Demi” is the fourth studio album of Lovato. It featured a combination of bubblegum pop and synthpop. The review on this album was positive from music critics.

This made it her highest-selling album in the first week. This album made it to the top ten charts in countries like New Zealand, Spain, and the UK.

It received a Gold certification in the US, Mexico, Canada, Brazil, the UK, and Sweden.

She appeared in four episodes of the fifth season of the American musical comedy-drama television series “Glee”.

A cover of “Let it Go” by Idina Menzel was released by Lovato for the Disney film “Frozen”. This song was well received and promoted as the film’s soundtrack.

It peaked at number 38 on the Billboard Hot 100 chart. It got double Platinum certification from the RIAA.

In December 2014, she launched a skincare line called “Devonne by Demi”.

2015: Lovato released her fifth studio album titled “Confident”. This album received generally positive reviews from music critics.  In its first week of release, it sold 98,000 copies. It peaked at number two on the Billboard 200 chart.

She received the first-ever Rulebreaker Award at the 2015 Billboard Women in Music event. 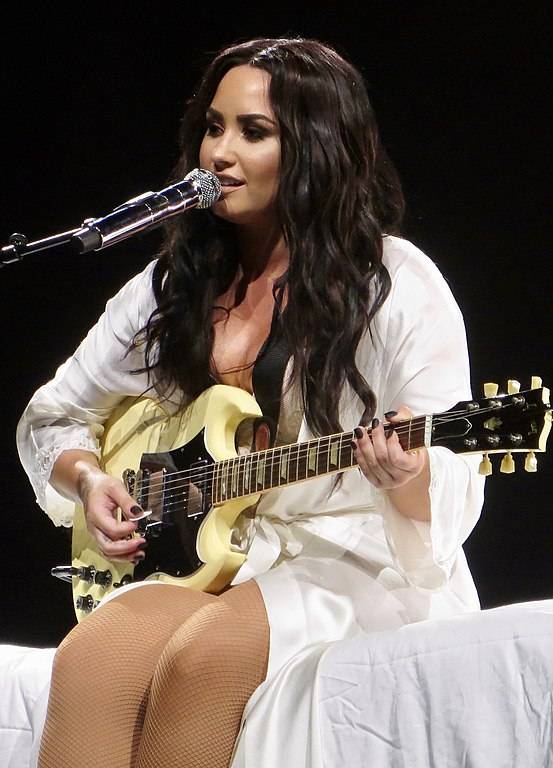 2017: Times magazine included Lovato in its annual list of the “100 most influential people”.

Lovato collaborated with the sportswear line “Fabletics” to support the United Nations’ initiative, “Girl Up”.

“Tell Me You Love Me” a sixth album was released. The first single of the album “Sorry Not Sorry” became her highest selling song in the US.

It received quadruple Platinum certification by RIAA. The song peaked at numbers 6 and 8 in New Zealand, the United States, and Australia Charts respectively.

The album itself debuted at number three on the US Billboard 200 with first-week sales of 48,000 copies.

2018: She featured in songs of artists like Christina Aguilera and Clean Bandit.

Lovato released a new single titled “Sober”. The song discusses her struggles with addiction and sobriety. She revealed in the song that she had relapsed after six years of sobriety.

Demi Lovato is not yet married. She has been in various relationships. She once dated singer Joe Jonas between 2008 and 2010.

She dated actor Wilmer Valderrama between 2010 and 2016. She dated UFC mixed martial artist Luke Rockhold between 2016 and 2017.

She was critical of her father who divorced her mother when she was 2 years.

She suffered from depression, self-harm, an eating disorder and being bullied. She went into rehab at the age of 18. She also struggled with alcoholism and cocaine addiction.

In 2010, she went into a treatment facility for “physical and emotional issues”. This occurred after withdrawing from a concert tour with the Jonas Brothers.

The decision to enter into treatment was further boosted after she punched female dancer Alex Welch.

In 2013, she lived in a sober-living facility in Los Angeles for more than a year.

In July 2018, Lovato was hospitalized for two weeks and subsequently entered an in-patient rehab facility.

This followed after she was rushed to the Cedars-Sinai Medical Center in Los Angeles after emergency services were called to her home due to an opioid overdose.

Demi Lovato is an activist. She is also a supporter of gay rights. She also supports people with eating disorders, mental health, and mental health.